Are you taking steps in your safety program to address the graying of your workforce?

Older people are dying on the job at a higher rate than workers overall, even as the rate of workplace fatalities decreases, according to an Associated Press analysis of federal statistics.

It’s a trend that’s particularly alarming as baby boomers reject the traditional retirement age of 65 and keep working. The U.S. government estimates that by 2024, older workers will account for 25 percent of the labor market.

Getting old — and the physical changes associated with it — “could potentially make a workplace injury into a much more serious injury or a potentially fatal injury,” said Ken Scott, an epidemiologist with the Denver Public Health Department.

William White, 56, fell 25 feet while working at Testa Produce Inc. on Chicago’s South Side. He later died of his injuries.

“I thought it wouldn’t happen to him,” his son, William White Jr., said in an interview. “Accidents happen. He just made the wrong move.” 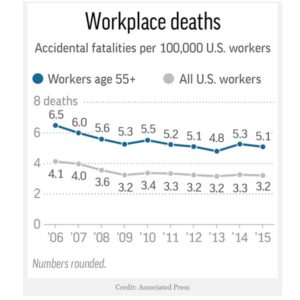 The AP analysis showed that the workplace fatality rate for all workers — and for those 55 and older — decreased by 22 percent between 2006 and 2015. But the rate of fatal accidents among older workers during that time period was 50 percent to 65 percent higher than for all workers, depending on the year.

During that time period, the number of older people in the workplace increased by 37 percent. That compares with a 6 percent rise in the population of workers overall.

Ruth Finkelstein, co-director of Columbia University’s Aging Center, cautions against stereotyping. She said older people have a range of physical and mental abilities and that it’s dangerous to lump all people in an age group together because it could lead to discrimination.

“I’m just not positive that 55-70 year olds need so much more protection than workers 52-20, but are all those people needing protection now? Yes, absolutely. We are not paying enough attention to occupational safety in this country.”

The AP analysis is based on data from the Bureau of Labor Statistics’ Census for Fatal Occupational Injuries and one-year estimates from the American Community Survey, which looks at the working population. It excludes cases where the cause of death was from a “natural cause” such as a heart attack or stroke.

AP also examined the number and types of accidents in which older workers died between 2011, when the bureau changed the way it categorized accidents, and 2015:

William White Jr. explained what happened in the Sept. 24 accident that killed his father. “He went up to get an item for the delivery driver and the next thing you know he made a wrong move and fell,” the Chicago resident said.

Testa Inc. was fined $12,600 by the U.S. Occupational Safety and Health Administration for failing to provide safety training. The company declined comment.

In most states, the fatal accident rates for older workers were consistently higher than comparable rates for all workers.

Nevada, New Jersey and Washington had the greatest percent increase in fatal accident rates for older workers between 2006 and 2015.

The three states with the biggest percent decrease were Hawaii, Oregon and Vermont.

In two states — North Dakota and Wisconsin — the trend was reversed; older worker accident rates got smaller while the accident rate overall increased.

An Associated Press-NORC Center for Public Affairs Research poll found in 2013 that 44 percent of older Americans said their job required physical effort most or almost all of the time, and 36 percent said it was more difficult to complete the physical requirements of their jobs than it was when they were younger.

Transportation accidents account for a large portion of fatal workplace incidents among both older workers and workers in general.

The AP analysis also showed that older workers were involved in about 1 in 4 fatal workplace accidents related to fires and explosions from 2011 to 2015.

summitpost2020-08-26T16:15:56-04:00
Summit Safety & Efficiency Solutions is concerned about the safety of you and your team during the Coronavirus Pandemic. Depending on the level of cleaning you need assistance with, we offer several approaches and levels
READ ABOUT OUR DISINFECTION SERVICES
X